FOR YEARS now, we’ve been predicting the implosion of the fixed interest bond bubble… and we believe it cannot be too far away now.

The bond market is getting deeper and deeper into Alice in Wonderland territory.

Well about $11 trillion of global sovereign bonds now have negative yields, including:

That’s about one-third of all outstanding sovereign bond issuance.

Consider an investor (a pension fund, say) buying a nominal $10 million of a 10-year bond with a negative yield.

Depending on the price, that investor may now hold an investment worth $9.75 million.

If he holds the bond to maturity, he has now locked in about 9 years of losses, and has guaranteed that he will never get back in principle and interest what he paid.

Why on earth would anyone make such an investment?

It’s because of the ‘greater fool’ theory, which many of you will have heard of…

The investor believes that he will be able to sell the bond on to a ‘greater fool’ who is prepared to buy the bond for an even lower yield – and therefore a higher price – allowing the investor to book a profit.

But what if the original investor is himself the ‘greater fool’ and no one else is prepared to buy from him? As the awful realisation dawns on him, that’s when the bubble bursts.

At the moment, the ‘greater fools’ are the central banks, which are hoovering up bonds as part of their ill-conceived QE programs.

But when the central banks run out of fire- power and the realisation dawns that the emperor has no clothes… that’s when the panic selling will start.

But if you’re primarily focused on equity investment, why should you even care about a bond price crash? Is there some sort of link between share prices and bond prices?

To answer this question, we need to delve into a bit of theory.

Take a look at the chart below. It shows the correlation between US 10-year Treasury bond yields and the S&P 500 stock index between 1900 and 2014. 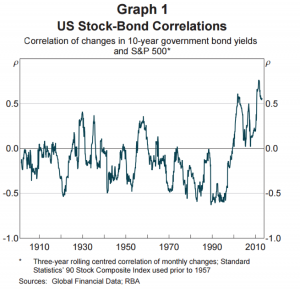 You don’t need to know exactly how ‘correlation’ is calculated (but if you’d like to know more, go here).

All you need to know is this:

When your editor first studied economics more than half a century ago, he was taught that there was a negative correlation be- tween bond yields and share prices.

In other words, when bond yields fell (i.e. when bond prices rose), share prices would tend to rise, and vice versa.

The chart shows that, for most of the twentieth century, that relationship did hold true.

If bond yields are falling, it implies low interest rates.

That means that companies can borrow more cheaply – good for corporate profits, and therefore good for share prices.

But from 2000 to the present day, something changed…

It was, of course, the potentially catastrophic intervention of the central banks, creating money out of thin air and buying up vast quantities of bonds in a futile attempt to stop the economy falling into deflation.

Since 2000, we know that bond yields and interest rates have been tumbling – but the positive correlation indicates that the stock market has been moving in the same direction: predominantly downwards relative to bond yields. The Footsie still hasn’t broken its all-time closing high set in December 1999.

Economists are still arguing about why the correlation has changed from negative to positive. We don’t need to go into their arguments here, since they’re based on theories about investment that are probably outmoded.

Anyway… the point is that there is indeed a correlation between bond market yields and share prices; and that since 2000, the correlation has flipped from negative to positive.

So it follows that if the bond market blows up and bondholders panic-sell, bond prices will plunge, bond yields will rocket…

…and because the correlation is positive, equity prices will rocket too.

Does that sound counter-intuitive to you? A bond crisis inducing a stockmarket boom?

It sounds pretty counterintuitive to us too…

But if you think about it, there’s a possible logical explanation.

Look at it this way.

There’s a colossal pool of money sloshing around the world that has to be invested somewhere.

Most of it is invested either in bonds (the US Treasury alone has outstanding debt of $13.4 trillion) or equities (globally worth around $70 trillion).

When the bond crash happens and bond investors get caught up in a selling frenzy, where will that money go?

Keeping it in cash is not an option, especially in these days of negative interest rates.

The investment managers of, for example, huge pension funds, must find some way of getting a positive yield.

It seems quite plausible to us that that a big slug of the money released by bondholders’ selling will find its way into the stockmarket.